The Institute of Australian Geographers Conference for 2019 was held in Hobart at the Wrest Point Convention and Entertainment Center from the 9th to the 12th of July. Thanks to the generosity of the conference organisers, APECS Oceania was represented very well through the assistance of Nathaniel Young, a National Representative of APECS Oceania: 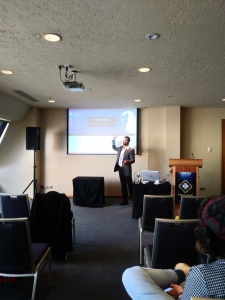 During the first day, APECS Oceania was also plugged by Nathaniel Young at the end of his talk on “Time series of crustal motion using GNSS: Exploring the expression of systematic errors“, highlighting the positive support the APECS Oceania and its members have offered during the span of his project.

Hopefully, through this exposure, more people become aware of this unique group, and its possibilities.